This week I am delighted to feature the very talented Diana J Febry on my website. Diana writes intriguing mysteries that hold your attention from first page to last. Her latest book is Point of No Return, and here are some details, supplied by Diana.

Point Of No Return is the third outing for DCI Peter Hatherall and DI Fiona Williams but as with the first two each book can be read as a stand alone mystery. They are called to James Palmer’s farm to investigate a spate of vandalism on his property. After a bomb explodes in the garage and a prime suspect disappears they realise this is much more sinister than it first appeared. As with all my books my primary intention is to entertain and write the type of books I like to read. The underlying theme in this book is disguise and the double-life we all lead to some extent playing the different roles that make up who we are. The reader should realise by the mid-point of the book who the culprit was but not who they are today. Yes – I do like to play with my readers but I always play fair and leave a trail of clues hidden within the story. 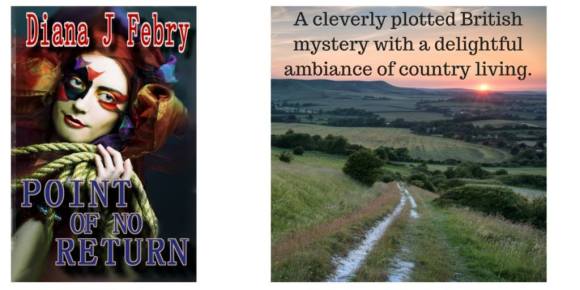 Do you use a pen name?

Yes. Diana J Febry was my mother’s maiden name. She died when I was in my early twenties and it somehow seemed appropriate and a way to remember her.

How do you enjoy to spend your time when not writing?

Now my children are grown up (or think they are) my constant companion is Albert my dog. I also have two horses Mr Paddy and Jaeica who are stabled on the Duke of Beaufort’s Badminton Estate. The four of us wander through the woods and parkland on the estate while I daydream thinking up new story ideas.

Name someone who had a strong childhood influence on you.

My maternal Grandmother was very much before her time. She had been a nanny for the Codrington family & travelled the world with them in the early 1900s. She told wonderful tales of her adventures & believed in “doing your own thing.”

Do you know what is going to happen at the end of the story before you sit down to write?

I don’t right at the start but because of the type of books I write once I’ve completed the first draft it is difficult to make major changes. To be fair to my readers I am very careful with the time-line and make sure when all is revealed at the end that characters were in the correct place at the relevant time for events to have happened the way I’ve suggested.

The rural setting for Diana’s stories

Some quotes from reviews

“A Classic Mystery to Keep You Guessing.”

“Point of No Return is a wonderful tale of murder, revenge, and suspense. The characters are full of the flaws we love to empathize with. The plot is full of misdirection and red herrings that make the mystery a real page turner.”

“Point of No Return is an excellent read, a fast-paced police procedural with a strong sense of place. Indeed, the sights and sounds of the countryside are evident on every page and draw you into the intimacy of a rural setting.”

“Point of No Return is a great British mystery – a highly enjoyable read. You will enjoy it even if you usually prefer fast-paced reads.”

“A very suspenseful story with a great cast of characters, plus a complex plot that will keep you guessing till the very end.”

Thank you very much Hannah for highlighting my books. Writing is a solitary act so the support of generous authors such as yourself is invaluable. I’m especially honoured as I’ve heard so many good reports about your own work.

My pleasure, Diana. I do urge all readers of my blog site to check out and read Diana’s books. They are excellent, among the best in modern detective fiction.

I love her stories. Great reads. Nice pictures and a great interview.