The Ann’s War Mystery Series is a series of five novellas set in 1944-5. Each story contains approximately 15,000 words and a complete mystery. The stories are: Betrayal, Invasion, Blackmail, Escape and Victory. Ann’s story arc will evolve over the series and reach its conclusion with book five, Victory. 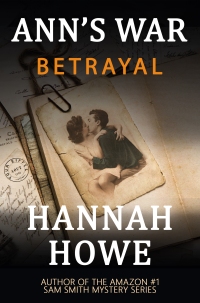 With her husband away on a top secret mission, Ann Morgan prepares for another secretarial day at Trevor Bowman’s detective agency. However, this day will be unlike any other. Over twenty-four hours, Ann will find her life turned upside-down as she discovers a murder, meets a handsome widower, Detective Inspector Max Deveraux, and confronts the murderer in a tale of temptation and duplicity. 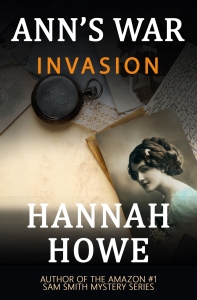 With her husband, Emrys, still missing in action, Ann Morgan receives a personal offer from debonair Detective Inspector Max Deveraux. Should she decline or accept his offer?

Meanwhile, in her professional life, Ann is faced with a dilemma. After Trevor Bowman’s murder, should she take up the reins at his detective agency?

While Ann ponders the personal and professional aspects of her life, a friend asks her to search for her missing daughter. Apparently, Adeline Hopkins, the daughter, endured a fractious relationship with her father. However, what about her ex-boyfriend and an American soldier, a GI she briefly walked out with?

As the GIs prepare to leave and embark upon the second wave of D-Day landings, Ann needs answers, only to find herself faced with a further dilemma, the dilemma of how best to serve justice. 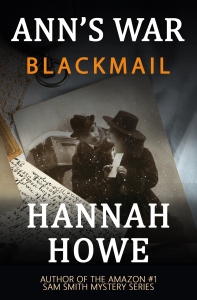 With her husband, Emrys, still missing in action Ann Morgan faces the prospect of spending her first wedding anniversary, and Christmas, alone. However, a phone call from Alistair Blythe, a young man she briefly walked out with before her marriage to Emrys, sets Ann on a trail that leads to murder, encounters with black market spivs and threats to her life.

With assistance from spymaster Charles Montagu and Detective Inspector Max Deveraux, Ann uncovers a major secret of the war. And, with the snow falling at Christmas, she receives a present she will never forget. 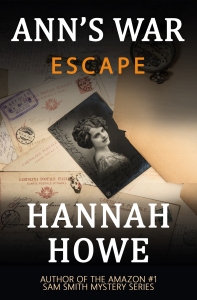 March 1945. After six bloody, tear-stained years, the war was nearly over. However, for the German prisoners of war incarcerated in Island Farm Camp 198 the end could not arrive soon enough – so they decided to escape.

As the German prisoners fled to all points of the compass, one of their number, Kurt Schneider, was left with blood on his fingers and a gun in his hand. Furthermore, a dead woman lay at his feet. Accused of murder, he seemed set to hang. However, Ann Morgan had encountered Kurt Schneider during his supervised labouring stints on the local farms. She had grown to like the young man and did not believe him capable of murder. Could Ann save Kurt and bring the true murderer to justice?

Meanwhile, with her husband Emrys still missing in action, Ann found herself drawn to handsome widower Detective Inspector Max Deveraux. In the heat of the moment, could Ann hold her emotions in check, or would she cross a line into remorse and regret? 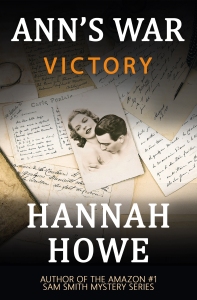 The war is over and Ann’s community is preparing for the VE Day celebrations. However, not everyone is in a celebratory mood. Ann’s husband, Emrys, has returned from France, a shadow of the man who left to serve his country. What happened in France? What thoughts are weighing heavily on Emrys’ mind?

Meanwhile, Doris Michael hires Ann to find her brother, Glyn, a man she hasn’t seen for two years. What has happened to Glyn? And what crucial part did he play in determining the outcome of the war?

As Ann seeks answers, she realises that even though the war is over, the true battle has only just begun, the battle to win the peace.